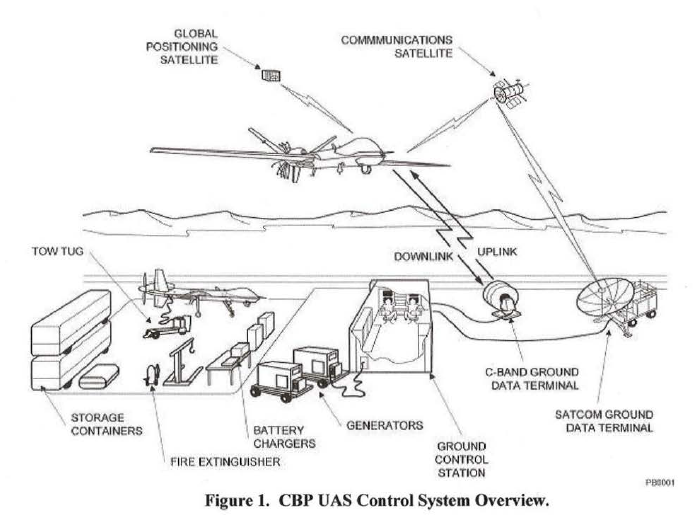 As the February 27 deadline for Congress to approve an appropriations bill for the Department of Homeland Security approaches, and the prospect of a last-minute deal becomes smaller, it is worth considering whether a DHS shutdown would affect the Customs and Border Protection drone program. The program, which we wrote about in a comprehensive post last December, operates nine unarmed Predator B drones over U.S. borders under the direct management of the Office of Air and Marine. It has found itself in the bright light of public scrutiny recently after a DHS Inspector General investigation concluded that the program was ineffective and did not meet the agency’s self-set performance goals. The program is the U.S. government’s most extensive domestic drone surveillance operation, and yet it also only represents a tiny fraction of DHS operations.

According to a Congressional Research Service report that examined the effects of the 2013 federal government shutdown on the DHS, all employees “whose work is necessary for the preservation of the safety of human life or the protection of property” would remain at work once the budget runs dry. These employees include, the report states, those working for Customs and Border Protection’s Border Security Programs. During the 2013 shutdown, only about 7,000 of CBP’s 52,000 employees were furloughed. It is estimated that only about 15 percent of DHS employees would be furloughed in a new shutdown.

During the 2013 shutdown, the CBP press office was unable to confirm whether drones were still flying (as a non-essentially employees, the press officers had been furloughed), though it was confirmed that CBP helicopters equipped with surveillance suites were conducting missions over the southern border. Since these helicopters serve a similar function to the CBP drones, it was assumed that the drones, also, were still flying. This Concept of Operations report for the CBP unmanned aerial vehicle mission program described the drones as being used to “support mission essential surveillance, detection, classification, identification, and prosecution (SDCIP) tasks.” If the same shutdown protocol remains in place for the 2015 shutdown, any aerial surveillance flights deemed critical for keeping the borders safe, including the flights of drones, will continue.

Though the DHS funding situation won’t stop routine flights of CBP drones, it has already caused the DHS to suspend its program providing security grants to local police forces. In some cases, these grants have been used to acquire drones. Though a shutdown would not affect police departments that are already flying DHS funded drone programs, no new police departments will acquire drones through the DHS until a full spending bill is approved.

That being said, in the case of a shutdown, or even an extension of the DHS’ current Continuing Resolution (CR) funding, the CBP program will not see any further investments or enhancements. This is significant, as the potential shutdown comes at a time when the usefulness of the drone program has been called into question. The DHS proposed budget for FY 2016 includes several spending items intended to improve the performance of the drone program. The budget includes $8.4 million to expand its National Border Geospatial Intelligence Strategy, as well as investments in its Command, Control, Communications, Computers, Intelligence, Surveillance, and Reconnaissance (C4ISR) systems. The CBP wants to spend $8.4 million to hire 15 additional crew members to operate the aircraft. The staff are needed, according to the DHS budget, “to provide increased CBP aerial surveillance, enforcement, and security posture for surges.” Other attempts to make the drone program more efficient, including the CBP’s plans to purchase six new Vehicle and Dismount Exploitation Radar (VADER) systems for its drones–at a cost of about $8 million each–will remain on hold. (For a detailed explanation of DHS drone spending plans for FY 2016, see its full budget justification).

Furthermore, in a letter urging Congress to reach a deal, Secretary of Homeland Security Jeh Johnson warned that without a full funding bill, “Investments to increase our ability to analyze geospatial intelligence cannot be made.” This geospatial intelligence is gathered by a range of aerial remote sensing platforms, including helicopters, manned aircraft, and the CBP’s drone fleet. In other words, though drones will continue to operate during a shutdown, the program cannot improve its ability to process and analyze the aerial surveillance data being collected by those drones. If Congress prevents a shutdown by merely renewing temporary CR funding for the DHS for another several month period, all of the CBP’s investment plans for its drone fleet, and any plans it may have for improving the program as a result of the report, remain on hold.

The CBP has been hoping to acquire new aircraft, but there are no items in the FY 2016 budget reflecting any acquisition plans, though this does not seem to have anything to do with the budget impasse–if anything, it is a result of the Inspector General’s audit. The CBP had planned, as of last year, to buy a replacement drone for the drone that crashed in January 2014. The replacement was not included in the 2016 budget. In 2012, the CBP announced plans to spend $443 million to expand its fleet of Predator drones. This plan is currently shelved, but it has not been discarded. The Inspector General’s report called for the CBP to reconsider the acquisition of new drones.

As yet, the CBP drone program has not been publicly acknowledged as an issue in contention in negotiations over the DHS bill, even though the DHS Inspector General called on Congress to specifically scrutinize the program. In January, Senators John McCain (R-AZ), Jeff Flake (R-AZ), and Kelly Ayotte (R-NH) introduced a bill that would oblige the CBP to overhaul its drone program in accordance with the recommendations laid out in the Inspector General’s audit. That bill has not progressed through the legislature.

The CBP drones will likely continue to fly, but their long-term prospects are far from certain. If the DHS budget remains precarious as a long political battle unfolds in Congress, the CBP’s ability to bring the drone program up to scratch will be greatly delayed; the drones may yet find themselves furloughed. Though there may be another DHS program that pops up in its place: amid all the discussions of a possible DHS shutdown, the Secret Service, another agency within the Department of Homeland Security, announced that it will begin testing its own drones over Washington, D.C.