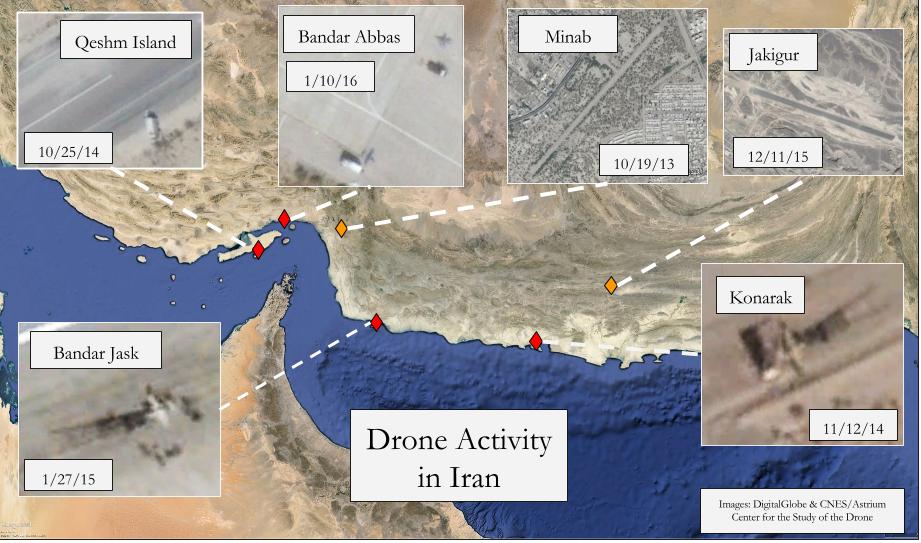 The Persian Gulf and Gulf of Oman have, for several years, been a nexus for Iranian military drone activity. At no time was this more evident than on January 29, the day Iran claimed that it had flown a drone over an American aircraft carrier. In our review of drone activity in the region, we have found that there are reasons to both doubt the legitimacy of the January 29 video and to believe that Iranian drone activity is more expansive than previously thought. Here’s what you need to know:

Iran has a long history of drone development stretching back to the Iran-Iraq war in the 1980s. Over the past few years, Iranian drones have been spotted at four airfields along Iran’s southern coastline. In June 2013, the now-retired OSIMINT blog reported that Iran was building a drone base on Qeshm Island. In April 2015, the Daily Beast reported that Iran was flying Mohajer drones out of Bandar Jask, approximately 150 miles to the south of the Strait of Hormuz. Later that month, Bellingcat found that a small airstrip in Konarak, a coastal town near the border with Pakistan, was likely home to another Mohajer UAV. Satellite images confirm the probable deployment of drones at each of these bases.

A February 29, 2016 investigation by Offiziere into a video of Iranian drone strikes in Syria found that some of the scenes in the video had been filmed at Tactical Air Base 10, the much larger Iranian air force base in Konarak approximately 7 miles to the north of the airstrip housing the Mohajer. The scenes showed a Shahed 129, an advanced Iranian military drone that resembles the American Predator or Reaper, taking off and landing at the airbase.

In addition to Qeshm, Bandar Jask and Konarak, two other airstrips in southeastern Iran have either served as drone bases in the past, or will in the future. The first is an airstrip outside of Minab, a town approximately 40 miles to the southeast of Bandar Abbas. It was here when, in April 2010, the Iranian military flew an early version of the Ababil-3 drone in support of the Great Prophet 5 military exercises. According to Galen Wright, an Iranian military specialist and author of The Arkenstone blog, this exercise was the first documented operational flight of the Ababil-3 drone in Iran. A video of the event contains coordinates that place the drone in the approximate area of the Minab airfield, as well as other topographic and structural similarities to satellite images. 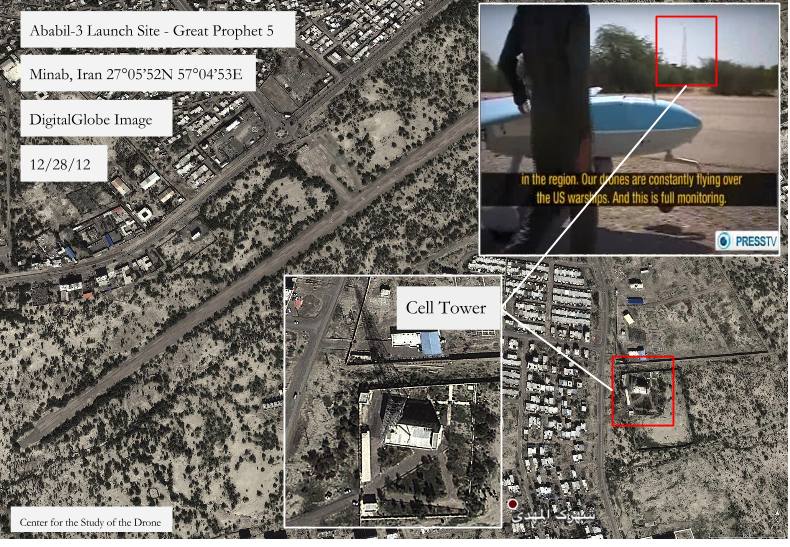 The second airstrip is located outside the Jakigur, a village near the border with Pakistan and approximately 90 miles north of Konarak. The Jakigur region has been the scene of clashes between Iranian forces and Baluch militants. In February 2014, militants with the Jaish al-Adl Iran, a Sunni insurgency, captured five Iranian border guards. On October 10, 2015, the Iranian Ministry of Housing and Urban Development announced that local officials had attended the opening of a “UAV runway” outside of Jakigur. The announcement was followed by reports in Iranian state-run media outlets. Satellite photos from December 11, 2015 confirm the presence of a newly-constructed runway, but do not reveal any drones.

There is a strong likelihood that Iran Iran operates drones out of another location, Bandar Abbas, a coastal city on the Strait of Hormuz. According to as yet unreported satellite imagery analyzed by the Center for the Study of the Drone, the Iranian military has flown drones out of an airfield at Bandar Abbas for at least two years. The drones first appear in an April 6, 2014 DigitalGlobe satellite image of Tactical Air Base 9, Bandar Abbas International Airport. They appear again in satellite images from January 10, 2015, November 8, 2015 and January 10, 2016. Drones may have indeed been operating from this location as early as 2013. Although no publicly available overhead imagery confirms the presence of drones at Bandar Abbas prior to April 6, 2014, a still photo reportedly shows an Ababil-3 drone taking off from Bandar Abbas during the Velayat-4 military exercises in December 2013.

The drones in the satellite images also match the description of the Ababil-3. The aircraft in the images have 16-18-foot wingspans and are 11-13 feet long. Unlike the rail-launched Mohajer drones that have been spotted at other Iranian airfields, the aircraft pictured at Bandar Abbas are wheeled, which means that they take off from a runway. With twin-boom tails, the drones are similar to the American-made RQ-2 Pioneer.

The Ababil is one of Iran’s most prolific drones. Variations of the drone have been spotted in Sudan, Venezuela, Gaza, Lebanon, Iraq, and Syria. Unlike the much smaller airfields at Qeshm, Bandar Jask and Konarak, Bandar Abbas is a major civilian and military airport at the heart of a city that is also home to Iran’s largest naval base. The Ababil-3s are slightly larger and more capable than the Mohajers that have been deployed at the other bases. According to Galen Wright at the Arkenstone, the Ababil can carry three types of payloads, including a downward-facing camera for surveillance and a forward-facing camera for navigation. With a flight range of around 100 kilometers, the Ababils could handily surveil traffic through the Strait of Hormuz. The continued deployment of the drones at Bandar Abbas indicates Iranian drones are likely to become a familiar sight over this critical maritime juncture. 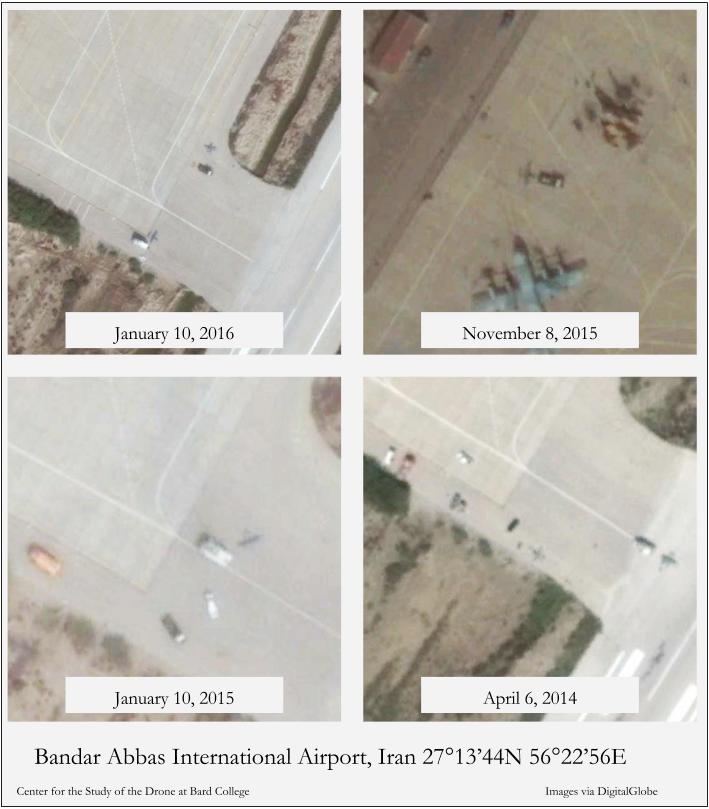 On January 29, Iranian state-run news agency IRINN released a video purporting to show an overflight of a U.S. aircraft carrier by an Iranian military drone. This video was picked up by the Associated Press and circulated widely. The video shows a drone taking off, before cutting to aerial images of the aircraft carrier. Concerns about the accuracy of the video were first published on Twitter not long after the video was released. Twitter user Raj Kumar, @rajfortyseven, noted that the timestamp at the beginning was different from the timestamp later on in the video. Kumar placed the drone at Konarak, the same airstrip where Bellingcat found the Mohajer drones in 2015, based on topographical similarities.

A deeper look into Kumar’s initial observations suggests that the video is indeed a mashup of two different videos, neither of which were taken by a drone on January 29.

According to a Mehr News Agency interview with Iranian Navy Deputy Commander Rear Admiral Seyed Mahmoud Mousavi, the drone overflight occurred on the “third day of Velayat-94 drills.” Velayat-94, a massive Iranian military exercise, began on Wednesday, January 27, putting the overflight on January 29, the same day that the video was released. Meanwhile, U.S. Navy spokesperson Cmdr. Kevin Stephens told the Associated Press that an Iranian drone had indeed overflown the USS Harry S. Truman and a French warship, but that the incident had occurred on January 12, weeks before the Velayat-94 drills.

Cmdr. Stephens told the Associated Press that the drone that overflew the USS Harry S. Truman on January 12 was a Shahed 129, the advanced Iranian drone. This claim was reinforced after the Navy released video footage of what appears to be an S129 UAV to the Associated Press on February 10. The drone in the Iranian overflight video, however, is clearly not an S129. The video shows a drone on a rail launcher, meaning that it is a much smaller drone than the S129. It is most likely a Mohajer-2, the small reconnaissance drones that have been previously spotted at the Qeshm, Jask and Konarak airbases.

Based on the opening scenes of the video, the drone appears to be taking off from the airstrip outside Konarak. The absence of runway threshold or number designation markings and the short centerline markings on the runway suggest that the runway does not belong to a major airport. The proximity of the airstrip to the water, the placement of vegetation and nearby access roads, and the presence of a perimeter fence evident in the video correspond to satellite images of the Konarak airstrip from December. Missing from the satellite images are the short centerline markings which may have been painted in the time since the picture was taken.

The second still image from the drone video identifies the aircraft carrier at 25°25.44’N and 57°02.13’E. This places the vessel in the Gulf of Oman, roughly 210 miles west of Konarak and 130 miles south of Bandar Abbas. According to Stratfor’s U.S. Naval Update Map from late January and early February, the USS Harry S. Truman aircraft carrier was in the Persian Gulf, where it was supporting the air campaign against ISIS. If the drone did indeed come from Konarak, the location of the carrier according to the coordinates would be outside the flight range of a small, rail-launched drone like the Mohajer-2.

The Stratfor U.S. Naval Update Map does put the USS Harry S. Truman as transiting through the Gulf of Oman on its way to the Persian Gulf in the last week of December 2015. This would coincide with the location and date in the second still image from the video.

Summary
It is possible that two events took place and neither involved an Iranian drone overflight on January 29. The first event may have been an Iranian overflight by either a manned or unmanned aircraft of the USS Harry S. Truman as it was traveling to the Persian Gulf on December 26. The second event may have been the January 12 overflight of the USS Harry S. Truman by the Iranian Shahed 129 drone. Based on the available information, however, there are reasons to doubt that the January 29 video of the aircraft carrier is an accurate record of events or even a video from a drone at all.