Trevor Paglen is a photographer, writer and investigator. His work takes aim at the U.S. government’s network of secret facilities and programs that have burgeoned since September 11; as he puts it, this means that “there is very little evidentiary material in the images that I create.” His interest in “the line that separates vision from knowledge” led him, inevitably, to drones. Paglen’s photographs of drones have become canonical. One image in particular, a blurred photograph of a Reaper drone at an Air Base in Indian Springs, Nevada, captures exactly what it is about drones which has taken such a firm hold of our imaginations. Although the image is extremely distorted, the hulking Reaper is immediately recognizable as a drone. By creating an image of a drone that is highly obscured and abstracted, and yet eminently recognizable, Paglen has represented the space that drones inhabit in the public imagination. Paglen has also pointed his telescopic camera lens at government drones in mid-flight; in the resulting images, the drones appear as tiny specks in the sky, further highlighting the tension between their outsize presence in mass media and the fact that they are rarely, if ever, physically seen. But Paglen’s interest in drones extends beyond the aesthetic paradox that they present. He maintains that his work is “not so much trying to fill in these metaphorical blank spots as it is trying to understand how they’re produced and what sort of state capacities and powers have to be developed in order to create and sustain such a system.”

A geographer by training, Trevor Paglen received a Ph.D in Geography from Berkeley and an MFA from the Art Institute of Chicago. He is the author of five books, Torture Taxi: On the Trail of the CIA’s Rendition Flights, Blank Spots on the Map: The Dark Geography of the Pentagon’s Secret World, Invisible: Covert Operations and Classified Landscapes, I Could Tell You But Then You Would Have to Be Destroyed By Me: Emblems from the Pentagon’s Black World and The Last Pictures. His art has been shown internationally in both solo and group shows.

Center for the Study of the Drone When did you begin photographing military subjects and military sites?

Trevor Paglen I started looking at military sites in the late 1990s. The work that I do photographing military sites is quite specialized. I don’t just go into military bases and take pictures. I am specifically interested in bases and military installations and infrastructures that are either secret—in other words the existence of the facility is secret—or facilities that are primarily funded through classified spending and where classified research or classified development takes place. Many of these facilities are in the middle of states like Nevada and Utah, in places that have enormous buffer zones around them, in some cases up to 20 or 30 miles.

The challenge, in terms of trying to take images of these sites, has to do with developing techniques to take photos or see these sorts of places. I spent many years developing techniques based on astrophotography. I researched the way in which astronomers take pictures of galaxies or distant planets and tried to adopt some of those techniques for terrestrial photography, to take images of places that are oftentimes invisible with the unaided eye. It took me about four or five years of researching those techniques and developing them before I felt comfortable publishing any of my images.

Drone It seems that a parallel can be drawn between your work and Wikileaks. It has an investigative instinct. And yet it isn’t exactly the same. How would you describe your work?

Paglen There are two components to the work that I do. One is writing and speaking. I make arguments about these places, about these infrastructures, the economies and the legal regimes that they are a part of. Images are not so good at making linear arguments in that way.

Drone What are the most common responses to your work?

Paglen One of the places I’ve taken images of was the Dugway Proving Ground in Utah, where a lot of biotechnological and chemical weapons are developed. After a talk I gave in Utah, I met a student who had some ideas about how I could create clearer images of this facility. The images that I had produced of this facility were very impressionistic, almost like color fields. The student asked, “Why didn’t you make an image that was clearer, where you could see what was going on?”  Then he realized, even if you clearly saw the top edge of that building at Dugway, what, if anything at all, would that image explain? When you’re looking at an obscure chemicals weapons facility, perhaps more abstract images can actually convey the things that go on in that facility better than the “objective-looking images.”

Drone When I look at some of your pictures that are blurry or obscured in some way, I’m left with a feeling of anxiety, a sense of having unanswered questions. That, it seems to me, is precisely the point.

Drone In your images, you create something representative yet decontextualized, almost to the point that it means nothing. How do you reconcile that with your training in geography, which seeks to represent through context?

Paglen There are multiple things that I do as a person in the world. One of them would be recognizable as social science. I make arguments and write books about social science. Those sorts of arguments are very different from the kinds of things you can do as an image-maker. I really do think that different mediums are incommensurable. You are not able to translate a piece of music into a painting, and you cannot translate a painting into a text. There’s a cliché that an image is worth a thousand words; well it’s worth a great deal more than that, as evidenced by the number of art historical dissertations on Jackson Pollock.

Drone You say that your work tries to fill in “blank spots on the map.” What do you mean by that term, and what do you hope to achieve by filling these blanks spots?

Paglen The idea of the blank spot on the map goes back to early Portuguese, Spanish and English imperial maps. The blank spots were places where anything could happen, 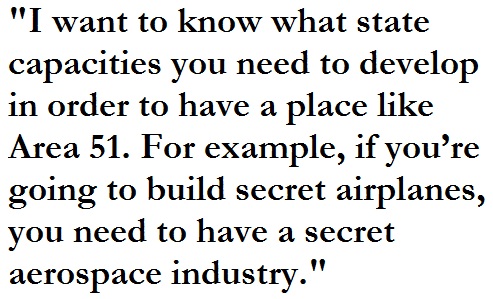 places of extreme violence—the Belgian Congo , for example. I saw a kind of symmetry with the spaces outside of the normal workings of the contemporary state, where there are different rules that are often times incredibly violent. In the old maps, these are places where there were people who weren’t quite people.

The work that I’ve done is not so much trying to fill in these metaphorical blank spots as trying to understand how they’re produced and what sort of state capacities and powers have to be developed in order to create and sustain such places. My project was never to figure out what exactly is going on in a place like Area 51. I think that’s beside the point of my work.

Instead, I want to know what state capacities you need to develop in order to have a place like Area 51, an unacknowledged airbase. There are a huge number of them. For example, if you’re going to build secret airplanes, you need to have a secret aerospace industry. You’re going to have secret research, which means that you’d need to figure out a way of organizing people in such a way that they don’t talk about what they are doing, or they don’t necessarily know the specifics of what they’re doing.

So a kind of social engineering needs to take place. If you’re going to develop secret airplanes, you’re going to need to figure out how to fund them. Now, how do you fund an airplane in secret when the constitution states that all federal funding needs to be accounted for? The point being that there are enormous economic, social and political infrastructures that need to be in place to create and sustain something like classified flight testing. Over time, when you build these types of infrastructures, you end up developing a state within the state that has very different rules and different ways of operating than what we would think of as a kind of democratic state. Blank Spots on the Map is about trying to understand how, in order to make a place “disappear,” you have to develop an alternative state, an alternative economy, an alternative legal structure, and what the ramifications of doing that are.

Drone But wouldn’t you agree that some aspects of the state should remain secret?

Paglen In some cases that’s true. For example, I think you don’t want to have Twitter feeds about where different patrols are happening in real-time in Afghanistan. I think we agree that if you’re going to have a war in Afghanistan, that’s probably not something you want to do. You could get a lot of people killed for no reason.

Having said that, I really don’t think of secrets as what you don’t get to know. If you take the C.I.A.’s drone war, this is something we have an enormous amount of information on. We know when a drone strike occurs. We have a pretty good idea of the kinds of people that are being killed by them. We know where the drone bases are. We know an enormous amount about how that infrastructure works. However, because it’s technically a secret program, it’s not discussed in Congress, so there’s no legislative authority controlling it. Cases that have challenged the program have been consistently thrown out of the court system under the so-called “state secrets privilege.”

So secrecy in this case is not about access to information, it’s about creating and preserving certain kinds of state powers under the executive branch that are not subject to the oversight of other parts of the state or the people. You have to have almost monarchical powers in a part of the state in order to conduct one of these programs. This secret state, this “deep state,” has a tendency to continually transform the more democratic institutions that surround it in its own image. I think that is deeply troublesome for the future of democracy.