Aerial drones are media superstars; they tend to hog the spotlight. In their shadows, a whole ecosystem of ground based drones is evolving at an equally fervid pace, with equally significant implications for both the military and civilian spheres. The lowly Unmanned Ground Vehicle—UGV for short—is a much more prolific military technology than the aerial drone, with a longer history and a stranger future.

The first military UGV was probably the Russian TT-26 “Teletank,” which the Red Army developed in the 1930s. Two battalions of the Teletanks, which could be controlled remotely from another tank almost a mile away, were deployed in the Winter War against Finland in 1940. The teletanks could be mounted with machine guns, flamethrowers, and bombs. Closely thereafter, the German army unveiled the Goliath, a French-designed remote-control mini-tank that could be driven towards targets and remotely detonated. Despite their humble capabilities and their tendency to break, 7,564 Goliaths were produced. The Second World War saw the development of a number of similar single-use weapons platforms. Though it is tempting to define these as UGVs, the fact that they served exclusively single use bombs, rather than weapons delivery systems, means that they were more like precision-guided munitions than unmanned ground vehicles. A parallel would be to call a Hellfire missile a drone, rather than the Predator or Reaper that fires the missile and then returns to base to prepare for another mission.

The UGV did not take its modern form until 1972, when the British Military developed the Morfax Wheelbarrow, the first remote controlled Explosive Ordinance Disposal unit. The Wheelbarrow was created in response to the increasing loss of life and property that resulted from the activities of the Irish Republican Army. The Wheelbarrow laid the basic template for EOD robots, which are the most prolific unmanned ground vehicles in modern militaries.

Currently, the U.S. and other advanced militaries deploy a whole ecosystem of unmanned ground vehicles, from Recon Robotics’ 1.2 pound Throwbot, which can be tossed into difficult-to-reach or dangerous spaces, to the a variety of large EOD robots, such as iRobot’s Warrior, which is strong enough to lift 400 pounds.

The basic unifying purpose of remote-control UGVs, even those like the Goliath that were technically not what we’d call a UGV, was to develop systems with complex and high-level capabilities–things like defusing bombs–without putting those human being who were traditionally used for these capabilities in harm’s way. The basic concept was to create a machine that was able to parallel human actions like peeking around corners so that a live human being didn’t have to. This paradigm is about to change as a new breed of UGVs emerge. Here’s a selection of what kinds of platforms we can expect in the immediate future.

The Mobile Detection Assessment and Response System (MDARS) is a driverless rover that will be used by the Navy to randomly patrol storage sites. The system uses an array of sensors to detect intruders and keep tabs on inventory. The MDARS will soon be used to patrol nuclear arms facilities. 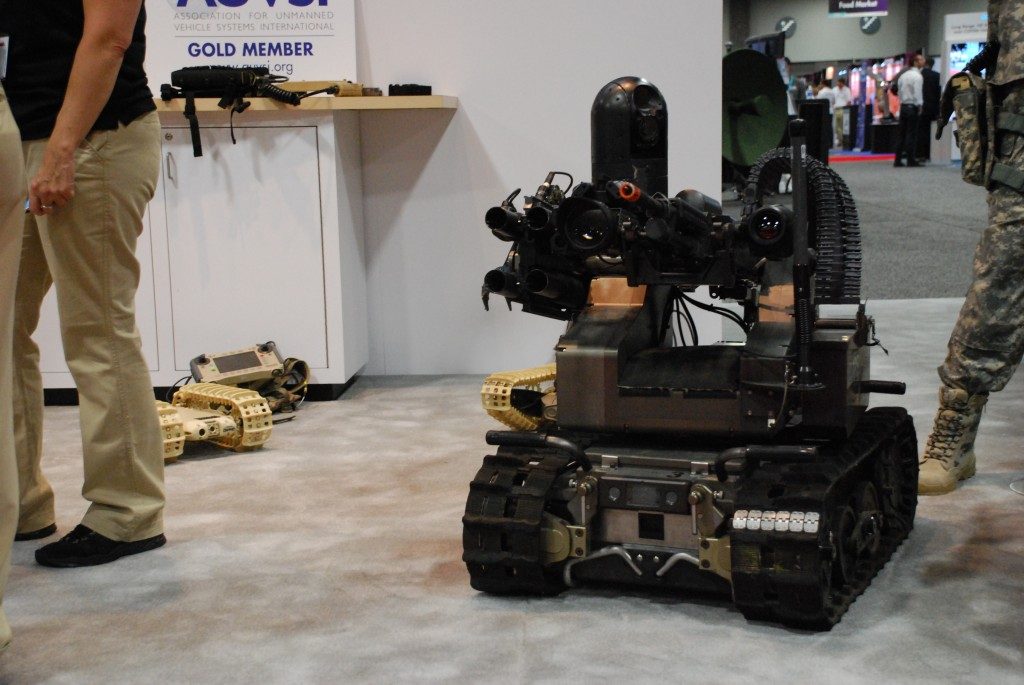 The Battlefield Extraction Assist Robot (BEAR), which is being developed by Vecna Technologies, will be used to rescue injured soldiers in battle. The BEAR robot, which is remotely controlled, scoops up wounded soldiers in its articulating arms, much the way a human rescuer might lift a wounded soldier.

Boston Dynamics is developing a variety of bio-mimicking quadripedal and bipedal unmanned ground vehicles, Including:

Samsung’s SGR-A1 is a stationary machine gun equipped sentry robot that can autonomously detect and track targets. The remote controlled robot has been deployed by the South Korean Military along its border with North Korea.

The Guardium, which was developed by the Israeli Army, is similar to the MDARS, except that it is capable of traveling at up to 50 mph, and can carry a 600-pound payload of lethal and less-than-lethal weapons. The Guardium is designed to be deployed in swarm-like configurations. Multiple Guardium units can be simultaneously controlled from a single control hub.

As ground robots evolve, they will become a more integral part of combat units than ever before. In the past, UGVs were commonly found attached to specialized teams such as Explosive Ordnance Disposal units. The new cohort of ground robots are meant to be incorporated into regular infantry combat units to operate in tandem with human soldiers. A recent article in the Marine Corps Times described a push at the Corps’ Warfighting Laboratory to develop  UGVs that can be controlled with the vocal and visual commands—such as hand signals— that are already used by combat squads. This way, the UGV will essentially become another member of the squad.  The integration of robots with human combat units will influence the tactical capabilities on the squad level; for example, UGVs that are capable of carrying heavy weapons can accompany small units that traditionally only use light weapons. While UGVs will not be eliminating human combat roles anytime soon, they are fast on the road to becoming another member of the team.

By design, unmanned vehicles, whether they are airborne or ground-based, permit us to do more with less by adding to—and sometimes even substituting—the capabilities of human units. Investment in robotic systems reflect strategic choices in addition to expanding the tactical opportunities of combat squads. In Out of the Mountains: The Rise of the Urban Guerilla, David Kilcullen writes that conflicts are tending to be set predominantly in urban settings and that this requires developing military forces with a “light footprint” that can be inserted into these complex environments with as little interruption as possible. UGVs that deploy heavy weapons or carry supplies can replace equivalent human operated machinery. Fewer humans on the battlefield means that there is a lower threshold to sustaining these units with supplies and other kinds of support infrastructure that increases the footprint of a mission. At a time when American popular tolerance for “boots on the ground” is low, the integration of robots into human combat units could provide a broader array of opportunities for military action with fewer political risks.