It wasn’t Beau’s finest hour. In the closing minutes of a session on drone warfare at New York University’s Drones and Aerial Robotics Conference last fall, the self-described technologist stood up to ask what was, to put it charitably, an inelegant question. Journalist and filmmaker Madiha Tahir had offered an incisive analysis of the targeted killing program in Pakistan, linking it to a racist logic, equally operative back in the United States, according to which brown bodies are the first to be killed. Tahir’s presentation was marred by small errors and mispronunciations, and Beau was calling her out on one of them. Pressed by the moderator to frame his comment as a question, Beau asked: “Do you think that the same racism that gets applied to peoples that we don’t know enough about gets applied to drones because people don’t know enough about them?”

There was applause, and then nervous laughter. One of the other panelists muttered something about the stupidity of the remark. But I remember thinking that the question was a brave one, an admittedly clumsy attempt to reach across a gulf of mutual incomprehension. Tahir didn’t know that the high-altitude Global Hawk surveillance drone is unarmed and did not, from the looks of it, feel that her credibility should hinge on  her knowledge of that technical detail. Beau, by his own admission, doesn’t know much about Pakistan, but also couldn’t see why treating racism as a glitch to be worked out might be a function of his own unexamined privilege.

So, what might it look like to foreground these asymmetries of knowledge in thinking about how and why we disagree over drones, rather than taking Beau’s hastily composed question at face value as a charge of bigotry against technology? A moving essay by Olivia Rosane tries to do just that, connecting Beau’s reaction to “the complex nature of the creative act itself, the moral compromises one makes to get one’s dreams funded.” Yet Rosane’s focus on the individual, seemingly precultural urge to create means that her essay has little to say about the challenges to collective life posed by the proliferation of technologies like drones.

What might it look like to foreground these asymmetries of knowledge in thinking about how and why we disagree over drones, rather than taking Beau’s hastily composed question at face value as a charge of bigotry against technology?

Those are the challenges that Michel Callon, Pierre Lascoumes and Yannick Barthe take up in their book Acting in an Uncertain World, which was translated into English in 2009. For Callon and his colleagues, innovations in science and technology create what they call overflows, unforeseeable consequences that exceed the parameters the experts have placed around a problem to be solved. 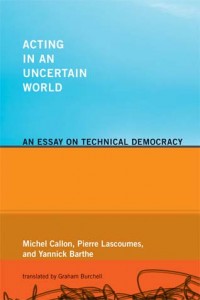 These overflows, which an economist might call externalities, cannot be managed by existing political institutions. So Callon, Lascoumes and Barthe call for new, complementary structures for deliberation that acknowledge the limits of technocratic decision-making and enlist ordinary citizens as co-investigators of emerging social and technical worlds. Controversies, they argue, enrich democracy. They would have regarded  the exchange between Beau and Tahir as a vital one. For if controversies highlight the gaps in our knowledge, Callon and his colleagues insist that they are also “an apparatus of exploration that makes possible the discovery of what and who makes up society.”

To draw out this point, consider two controversies about drones torn from the past month’s headlines. Each is marked by the twinning of social and technical concerns that Callon and his colleagues see as constitutive of technical democracy, and each involves the management of threatening overflows that challenge the very categories that undergird social life.

In the first case, a new documentary by Norwegian filmmaker Tonje Schei revealed that CIA drone strikes in Pakistan are actually being carried out by a secretive unit of Air Force personnel. The boundary between civilian and military operations, already known to be permeable—Navy SEALs can be “sheep-dipped” as spies—springs still another leak. In a way, the revelation shores up a more conventional division of labor when it comes to the enactment of state violence: historically, it is those in uniform who kill. As an investigation into a 2010 airstrike in Afghanistan revealed, though, it is no longer so easy to discern where the kill chain starts. Data glut produces a moral and legal question: Who counts as a combatant? In the era of the signature strike, it’s a question that is becoming exponentially more fraught.

One week after the release of Schei’s film, an organization known as Texas EquuSearch asked a federal appeals court to set aside an order from the Federal Aviation Administration prohibiting its use of drones in volunteer search and rescue efforts. The agency had told founder Gene Robinson that he could only fly with a valid certificate of authorization, which can be approved on an emergency basis in under an hour. The language of the petition largely echoes the decision in the Raphael Pirker case, in which an administrative law judge held that that the FAA has no regulatory authority over what, it turns out, may not be drones after all, but model aircraft. The difference, according to one expert, hinges on a highly technical definition of rate control. Even if the FAA does have regulatory authority, though, the petition argues that Texas EquuSearch should be exempt from the ban because its activities are humanitarian, rather than commercial, in nature. Here is another overflow; is there anything inherently noncommercial about humanitarianism? Our categories (and the FAA’s) are confounded by a private search for a missing child; it is not paid work, and yet not quite sport or recreation either.

Some of the most effective citizen interventions in the debates over drones have been more opportunistic, from Medea Benjamin’s disruption of a presidential speech last spring to the ongoing use of public record requests to conduct an unofficial drone census.

Both of these controversies have technical dimensions, and yet at their root they are struggles over how we divide up the social world we share. Our political institutions are giving us little to go on: bowing to White House pressure, the Senate recently dropped a provision from the intelligence bill that would have required an annual disclosure of drone killings, and the FAA’s rulemaking timeline for domestic drones remains opaque. Yet the hybrid forums that Callon, Lascoumes and Barthe extol in Acting in an Uncertain World have also been slow to develop, at least in the United States. Perhaps the criteria they propose for these forums are too preoccupied with continuity and structure. Some of the most effective citizen interventions in the debates over drones have been more opportunistic, from Medea Benjamin’s disruption of a presidential speech last spring to the ongoing use of public record requests to conduct an unofficial drone census. Both of these actions, in their own ways, involve gathering knowledge firsthand instead of delegating that responsibility to laboratories and legislatures. Both contribute to what Callon and his colleagues call the democratization of democracy.

But, a critic might sputter, harm is being done while all of this heady inquiry into the composition of the social is taking place. Callon & co. aren’t heartless;  they would agree. But is it certain that those harms are greater than the harms that would be sustained if our policies were the opposite? We may suspect so, as with the growing consensus that drone strikes have become a recruiting tool for al-Qaeda and that the restrictions around domestic drone use have caused harms of their own. But we cannot be certain, and it is this condition of uncertainty that Callon and his colleagues see as the defining problem of technical democracy. What reduces uncertainty and makes measured action possible is dialogue between citizens and experts, which leads to a more complete inventory of affected actors, problems and solutions. Needless to say, the record of this dialogue cannot be a classified memo.

We cannot be certain, and it is this condition of uncertainty that Callon and his colleagues see as the defining problem of technical democracy.

In her remarks in New York last fall, Madiha Tahir expressed her reservations about conferences where “the left and the right meet in a so-called marketplace of ideas, in which we are supposed to be meeting on equal terms and dialoguing.” As Tahir pointed out, one of the panelists who was supposed to be sitting beside her, the lawyer Shahzad Akbar, was not present because he had been denied a visa. Akbar should have been heard that day. But the reflexive dismissal of Beau’s question meant that, in a sense, he also went unheard. Controversies such as those at the heart of the drone debate, Callon and his colleagues conclude, can unleash a process of learning in which fixed identities become malleable and new alliances form. Yet this can only happen when we engage with those whose vocabularies we find wanting and whose politics we find baffling, teaching each other as we try to commensurate our visions of a livable world.