On Thursday March 19, the Smithsonian’s National Air and Space Museum, home to such iconic aircraft as the Enola Gay, the Spirit of St. Louis, the SR-71 Blackbird (which travelled from Los Angeles to its final home in D.C. in 1 hour, 4 minutes, and 20 seconds), and the Space Shuttle Discovery, took delivery of something much, much smaller: a DJI Phantom I quadcopter drone. And not just any Phantom, to be sure. It was our Phantom I. That is, it was owned and operated by the Center for the Study of the Drone for its educational programs at Bard College. Though only a fraction of the size of most of the famous aircraft at the NASM, the Phantom I represents a moment in aviation history that is, by some measures, no less significant.

NASM’s acquisition of our Phantom I represents the institution’s efforts to keep pace with the growing historical significance of the drone. As aerial unmanned systems continue to play a growing role in military, commercial, and civilian affairs, the NASM, an institution that works to comprehensively track and accurately represent U.S. and international aviation milestones, is increasingly turning its attention to this technology. Roger Connor is NASM’s curator for unmanned systems. When a drone like the Phantom joins the collection, it is most likely because Connor has decided that it is important enough to display. He has a difficult job. A historian by training, he has to spend much of his time thinking about the future. “We tend to take a look a long view—in twenty or thirty years, what is going to be the important moment to show?” he said. We are undoubtedly witnessing a key period in the history of unmanned aircraft, and it’s Connor’s job to capture the moment by selecting the aircraft that he feels are most historically significant.

Our Phantom I is by no means the first drone to find itself in the hallowed ground of the NASM’s two exhibit locations, in D.C., and in Chantilly, Virginia. The Smithsonian has been acquiring unmanned aircraft since the early 20th century. According to Connor, the museum currently holds about two dozen drones or proto-drones in its collection. These include Reginald Denny’s Radioplane target drones, the first unmanned aircraft to be mass-produced for U.S. military use, as well as a Culver TD2C-1, an optionally manned aircraft that was used as a higher altitude aerial target in the decade following WWII. It is perhaps not widely known among visitors to the museum that the F6F Hellcat on display, which appears to be a manned aircraft, was actually converted into a remote control drone to conduct flights over nuclear tests at Bikini Atoll. One of the stars of the NASM’s unmanned aircraft collection is the Gyrodyne QH-50C, a remarkable armed helicopter that was used to hunt for enemy submarines in the 1960s, and that remains in limited use today.

During the Cold War, the museum collected a number of experimental target drones, also known as “skeets,” none of which saw operational use in high volumes. These include some bizarre, little-known aircraft, such as the Katydid KDD-1 and the KD2C-2 Through this period, the NASM’s drone collection reflected the place that these systems held in the military world: a niche technology with limited applications that, though intriguing, was yet to see mainstream or significant operational use. These aircraft may bear little resemblance to the drones in use today, but they represent the technological groundwork on which modern drone technology is built.

In the past three decades, drones have departed from their modest roots and have become a fixture in the U.S. Armed Forces. Unmanned aircraft are now integral in air and ground operations. There are upwards of 10,000 drones in use in the U.S. military. NASM’s most significant military drones from this period are collected in an impressive hanging exhibit on the western end of the museum’s building in D.C. The Military Unmanned Aerial Vehicles exhibit, which was installed in 2008, features the aircraft that helped propel the drone into a new chapter of its history. “It represents that key moment, certainly within the U.S. military, of around 2004-2005 when UAVs made the transition from a niche application to something that is more significant,” Connor explained. 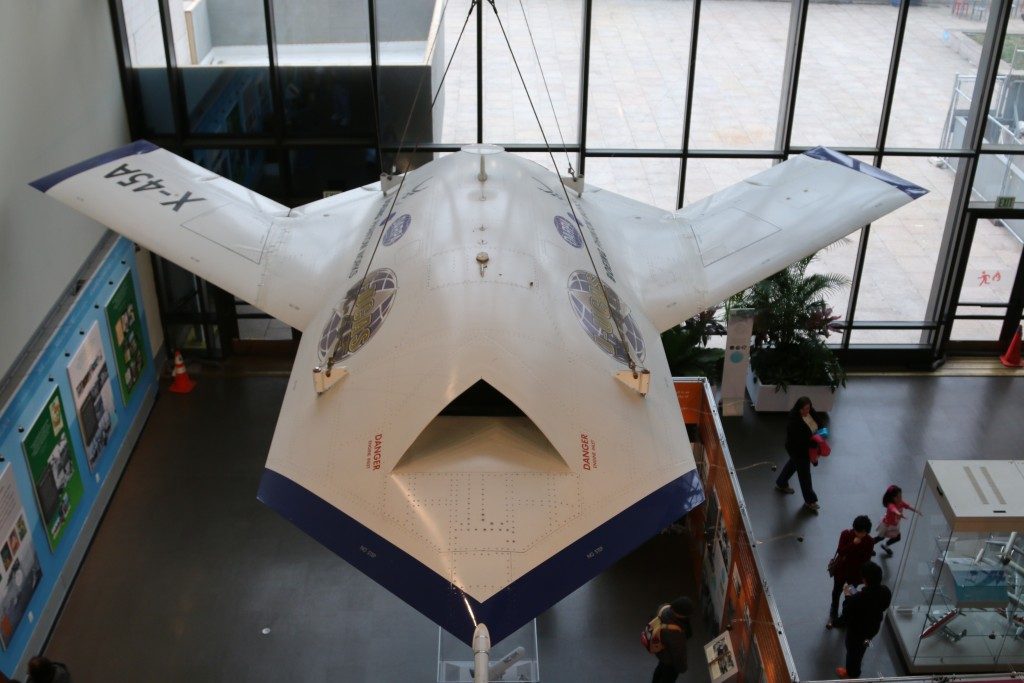 The exhibit features six unmanned aircraft, ranging from the small to the very large. It includes the RQ-2A Pioneer, an early tactical reconnaissance drone that was used by the Navy, Marines, and Army from 1986 to 2007. The Pioneer in the exhibit was deployed in the first Gulf War, where it was famously surrendered to by Iraqi troops. There is an AeroVironment RQ-14A Dragon Eye, an early iteration of the small hand-launched surveillance drones that have become a standard feature of U.S. ground operations in the past decade; AeroVironment’s hand-launched drones are the most common UAV in U.S. military use.

The exhibit includes two experimental aircraft that represent early attempts to develop drones capable of operating in contested airspace. One is the RQ-3A Darkstar, an oddly shaped flying-wing drone that might look more at home in a Star Wars movie than in a historical exhibit, is a prototype high-altitude long-endurance spy demonstrator developed by Lockheed Martin in the 1990s. The Darkstar was designed to operate autonomously, and would have been used in the same roles as the Northrop Grumman RQ-4 Global Hawk. Following a crash during testing, and as a result of Pentagon budget cuts, the Darkstar never made it past an early testing phase. The other experimental drone in the display is a Boeing X-45A demonstrator, developed for the Defense Advanced Research Projects Agency Joint Unmanned Combat Air Systems (J-UCAS) program. The X-45A was the first unmanned aircraft to release live weapons autonomously, in February 2005. The X-45A is no longer in development, though its successor, the X-47B demonstrator (developed by Northrop Grumman) has been making headlines with various autonomous flight feats, including an autonomous landing on an aircraft carrier. 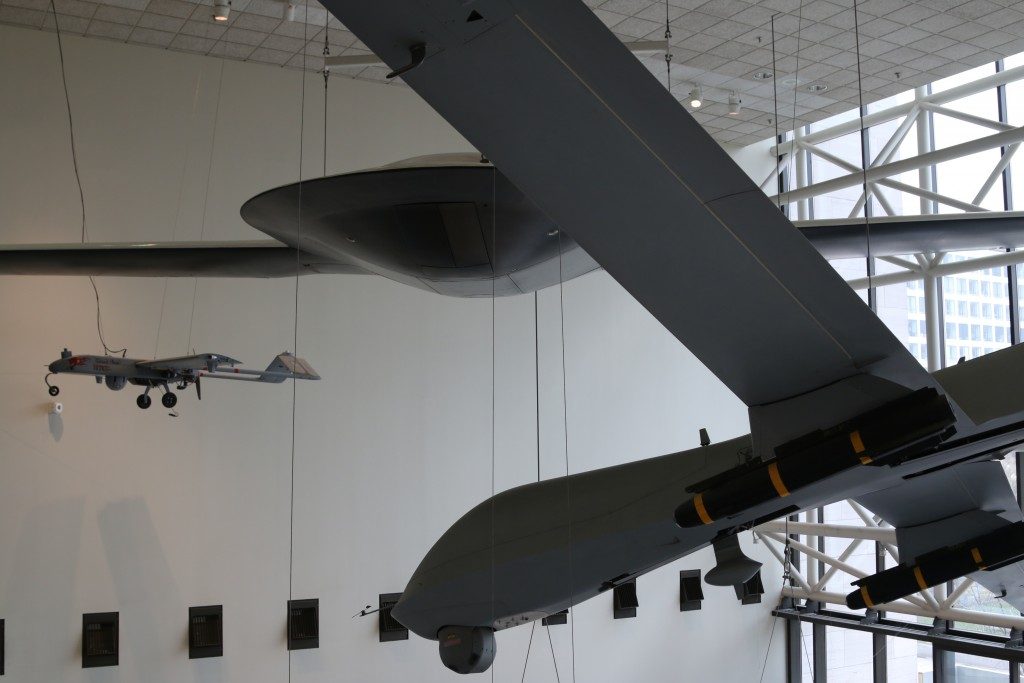 The most important unmanned aircraft in the exhibit is, unquestionably, the MQ-1 Predator. While any Predator would be significant, this particular Predator, tail number 3034, is especially important. “If you are going to display a Predator drone anywhere,” Connor said, “3034 is the one that you would want to have.” It was 3034, flying over Afghanistan on the first day of the U.S. invasion on October 7, 2001, that launched the first deadly strike ever conducted by a drone. Now carrying two inert Hellfire missiles on its wings, 3034 physically dominates the exhibit. From a historical perspective, its significance cannot be overstated. As any survey of contemporary portrayals of drone warfare in popular media will demonstrate, the Predator in Air Superiority Gray (the same color as 3034) has become a potent visual motif. Its spindly shape, with its distinctive downward V tail, has made it the aircraft that likely first comes to mind for many people at the mention of the word “drone.” Many visitors to the exhibit will no doubt experience a flash of recognition at the sight of 3034: even if they don’t know that it’s a Predator, they’ll know that it’s a drone.

Because of 3034 and its successors, and particularly as a result of the role of unmanned aircraft in the CIA covert targeted killing program, drones have becomes much more significant and polemical than the curators at NASM might have ever imagined when they assembled the exhibit. The Predator is a common visual motif in artworks and popular media representations that protest and or challenge the use of drones for war, and it might be tempting to read the exhibit as taking a position on the debate. Connor stresses that the installation was never intended to serve as a commentary on the ethical or strategic implications of the technology. Rather, the display is merely intended to provide the public with a basic visual understanding of the technology. “It is just showing the visitor that these come in a lot of different flavors,” he explained. “All we are trying to do is achieve the most basic level of interpretation for the visitor…what are the pieces and how they go together.”

This is not to say that NASM will never engage with the issues and debates associated with the military use of unmanned aerial vehicles. The debate around drones ultimately informs the policies governing their use, and addressing that debate will be crucial to understanding the history of the technology. But we will have to wait a few years for NASM’s analysis. “Hopefully down the road, when we begin to get a little bit more distance from that time period,” Connor explained, “we will be able to start to layer on some of the nuances of interpretation on those artefacts and start to look at their longer term meanings.” 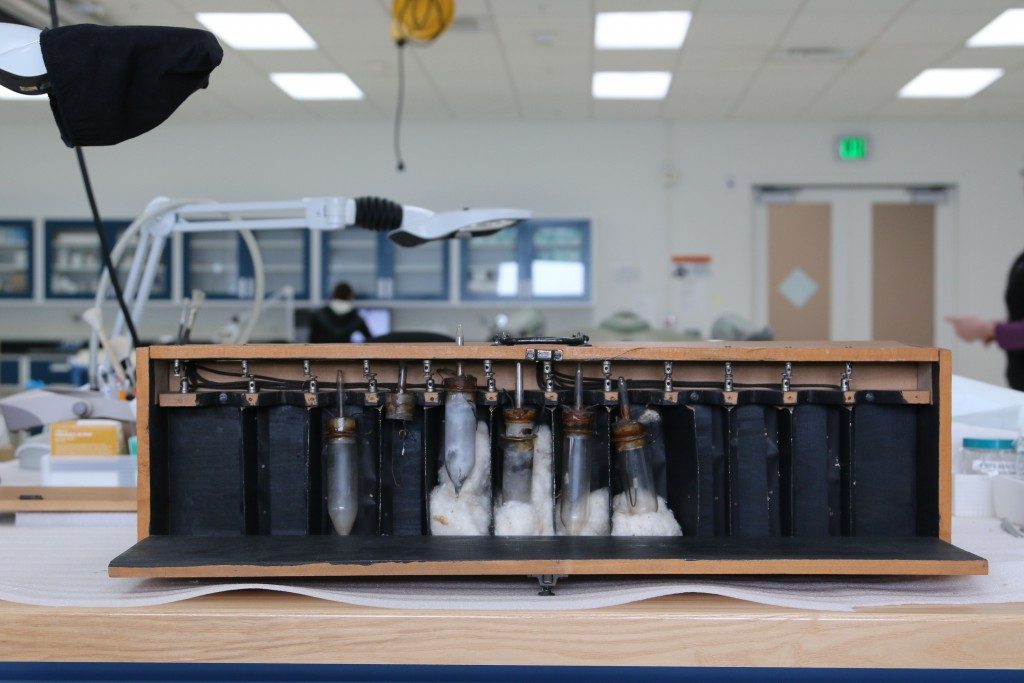 In the meantime, Connor is turning his attention to the civilian applications of the technology. If 2004-2005 was the moment in which military drones became mainstream, 2014-2015 will likely be remembered as the moment that civilian drones followed suit. This shift in focus is what motivated the acquisition of our Phantom I. The Phantom is a logical place to begin telling the story of the drone’s emergence in mainstream civilian and commercial life. For Connor, the Phantom brought about a watershed moment in the history of civilian drones. It was the first off-the-shelf quadcopter that required no DIY assembly, was relatively easy to operate and maintain, and was sold at a price that made it affordable to amateurs. “The Phantom alone has been produced in greater numbers than any manned aircraft has ever been, probably by at least a factor of two or more at this point,” said Connor. Just as the Predator is most likely what people think of when they think about military drones, if a person has ever encountered a civilian drone, chances are that it was a Phantom. “You can use the Phantom as a dividing line,” Connor said. “Whereas before the Phantom the personal UAV was a niche technology that was more popular among technically minded enthusiasts,” it is now being deployed by “folks that are really more interested in taking pictures and having that capability mounted on a platform, and not really caring what form it takes.”

The Phantom I is just the first of what Connor hopes will be numerous additions to the NASM’s civilian and commercial drone collection. His wish list includes the Boeing Insitu ScanEagle, a catapult-launched reconnaissance drone that was the first aircraft to receive a commercial use exemption from the FAA, and a key example of the kinds of systems that have been traditionally used for military purposes but which are increasingly being deployed by industrial customers such as oil and gas companies. Connor also wants a Schiebel CamCopter, which, like the ScanEagle, is used by numerous militaries but has also seen extensive use in the civilian domain, for film and television production. To reflect the growing interest in drones for agriculture, Connor would like a Yamaha R-Max, a large remote control helicopter that has been used extensively for crop-dusting operations in Japan over the past two decades.