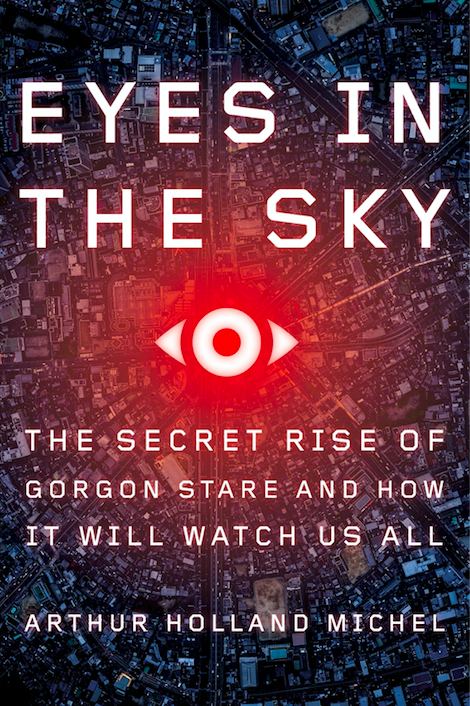 “On almost every page, Eyes in the Sky offers astonishing details that seem to belong in science fiction. But they’re true.” —Eric Schlosser

“Holland Michel’s book is not the first to look at technologies intended to achieve omniscience, but it is among the best.” —Sharon Weinberger, Nature

Eyes in the Sky: The Secret Rise of Gorgon Stare and How It Will Watch Us All, a new book by Center for the Study of the Drone co-director Arthur Holland Michel, addresses one of the most formidable—and secretive—surveillance technologies to emerge in recent decades: a class of systems capable of watching vast areas from above, tracking thousands of people and vehicles simultaneously.
Originally inspired by the movie Enemy of the State, this technology was fast-tracked to deployment in the mid-2000s in the hopes that it could be used to unravel insurgent groups in Iraq and Afghanistan. More recently, there has been a concerted push to deploy the technology into new domains and for a broad range of domestic civil applications—including law enforcement, most notably. Ongoing advances in computation, meanwhile, are enabling the automation of the technology, which vastly expands its surveillant power. All of which raises a range of urgent questions around how to protect privacy and civil liberties in our overwatched future.
Eyes in the Sky provides a detailed account of the history of the technology, from its early years as a somewhat overlooked laboratory experiment to the deployment, in 2014, of Gorgon Stare aboard a small fleet of MQ-9 Reapers. The book investigates the domestic use of the technology, exploring a controversial clandestine wide-area surveillance program in Baltimore in 2016 and a range of ongoing efforts to replicate the project over other cities. It then explores the numerous beneficial potentials of the technology, such as search-and-rescue and traffic monitoring. With an overview of ongoing advances in imaging, miniaturization, and computation, the book considers the likely evolution of wide-area surveillance from here. The final section describes wide-area surveillance’s potential dangers and suggests a range of measures to ensure that abuses and unanticipated risks do not arise from its use.
To order the book in hardcover, e-book, or audiobook format, click here.
For more information about author appearances in the coming weeks, click here.